Megan Costello didn’t think her hair salon would have to close. At first, the owner of The Karcher in Greenpoint, Brooklyn and her partner took pains to sanitize everything. Around March 13th, Costello and her partner let the stylists decide if they wanted to work the following week. Only two showed up. “It was like two days of us in there and it just feeling weird,” Costello said. Clients were cancelling. Everyone spread out. “The energy in the space was so dark. And people were just so upset and scared and nervous.’” The Karcher shut down, and her staff of nine has been out of work since.

Costello’s team is certainly not alone. Workers in service jobs like hers - hands-on, personal, intimate - have taken the biggest hit from COVID-19. It’s no surprise that jobs where people are physically close have suffered from social distancing. But it turns out, the ones doing these jobs are mostly women. Women make up almost all beauty salon workers and childcare providers, and more than half of those in accommodation and food service, according to the Bureau of Labor Statistics. These industries are all in the top five where women will lose the most jobs.

Over the last month, women have lost more jobs overall than men, despite being employed at a higher rate than men in back at the start of the year. A press release from the Institute for Women’s Policy Research quoted their CEO: “...‘because women are over-represented in the service sector, they will experience disproportionately higher unemployment and job loss compared to men,’ said C. Nicole Mason. ‘Service sector jobs tend to pay lower wages and have fewer benefits like healthcare, which makes women more economically vulnerable.’”

One woman who asked to remain unnamed, 31, learned this firsthand. She was working as a nanny for a family near Battery Park when she first learned she would have to stop working in March. She offered to take a few vacation days and then put her arrangement with the family on hold. “I was put on the spot so I didn't really have time to think about it, and it's something that I obviously offered up and agreed to,” she said. “But after I did that, I learned from all my other nanny friends that everyone's getting paid at least two weeks.”

She and her husband felt they had no choice to but to leave New York. She’s been helping out at her parent’s restaurant in Indiana since, for no pay. “I'm expected to still go back to them once this is all over. So technically I'm furloughed without any benefits.”

The disparities in these hands-on industries are staggering in COVID-19’s wake. The unemployment rate for women in “personal and laundry services,” which includes salons, jumped from 2% to 52.2% compared to April of last year. Leisure and hospitality? 4.3% to 40.3%. And in social services, which includes childcare, the rate climbed from 4% to 24.4%. Few other industry categories saw their rates climb to these heights. “The salon industry is mostly women,” said Costello. “We're the ones touching people, the ones caring for people, and those are the industries that have the hardest hit.”

In a city normally known for the quality and availablility of its many personal services, this fact stings. One week, Charmaine Querol, 33, was behind the bar at Our Wicked Lady in Bushwick, working a job she loved. Another, she was back home in San Francisco's East Bay, unemployed after the governor’s state-wide mandate to shut down non-essential business. She came to New York originally to pursue creative outlets like music and comedy, and supplemented these with bartending. 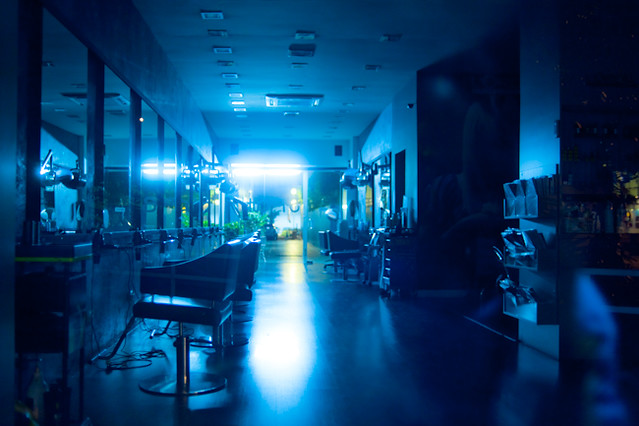 When the bar and venue shut down, Querol went to stay with her sister’s family, she said, to “feel the comfort of getting away from the depressed, gloomy, lonely life in Brooklyn, because everything is closed.” And though she said she’s saving money by living with family, and receives unemployment benefits, she liked her job. “You enjoy it, you enjoy the people, you enjoy the freedom of it,” she said of her work as a bartender. “It's like just going and working hanging out with your friends.”

Costello enjoyed the personal nature of her work too. “I miss my clients. I miss the conversations. I obviously miss using my hands and doing my art,” she said, “but it's really the connection and, I mean, I'm used to having like ten intimate conversations a day with people, and now I just have my husband,” she joked.

Costello and her business partner were able to raise the funds to pay their stylists for a month after the shutdown, but now they are applying for small business loans. They and seven employees have all tried applying for unemployment - only three were able to get it, and the rest are still stuck in bureaucratic limbo. Despite selling some gift cards and products, their income is now virtually gone.

Women in these hands-on fields, which can be far from financially secure to begin with, are more uncertain than ever about what the future holds. “We know we all know that everything won't be the same after this,” said Querol, the bartender from Our Wicked Lady. She knows there will be capacity restrictions in restaurants and bars. “Are there going to be enough shifts to go around if that's the case? Because if someone's just going to serve ten people in like six hours, are you even going to make enough tip?”

“It's such a confusing time. I don't know if it's safe to go to a brand new family,” said the nanny from Battery Park. She’s worried about transportation, because doesn’t have a car waiting for her in the city. “I don't know what their habits were over the last several weeks or months. And how would I get to work every day?”

Even with so many unanswered questions, the shutdown has a silver lining for Querol, who said she finally got a break. “I'm kind of enjoying the free time of continuing to work on past projects and finishing them, she said. “That was the root of my whole reason of coming to New York, to learn about myself, and get better at what I'm interested in doing.”